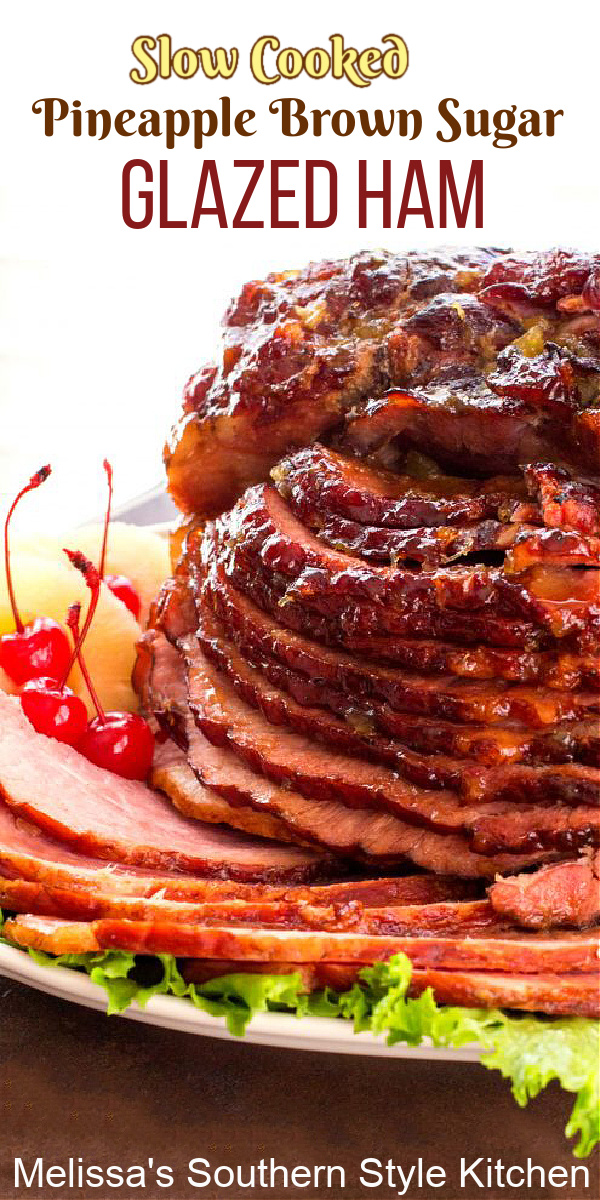 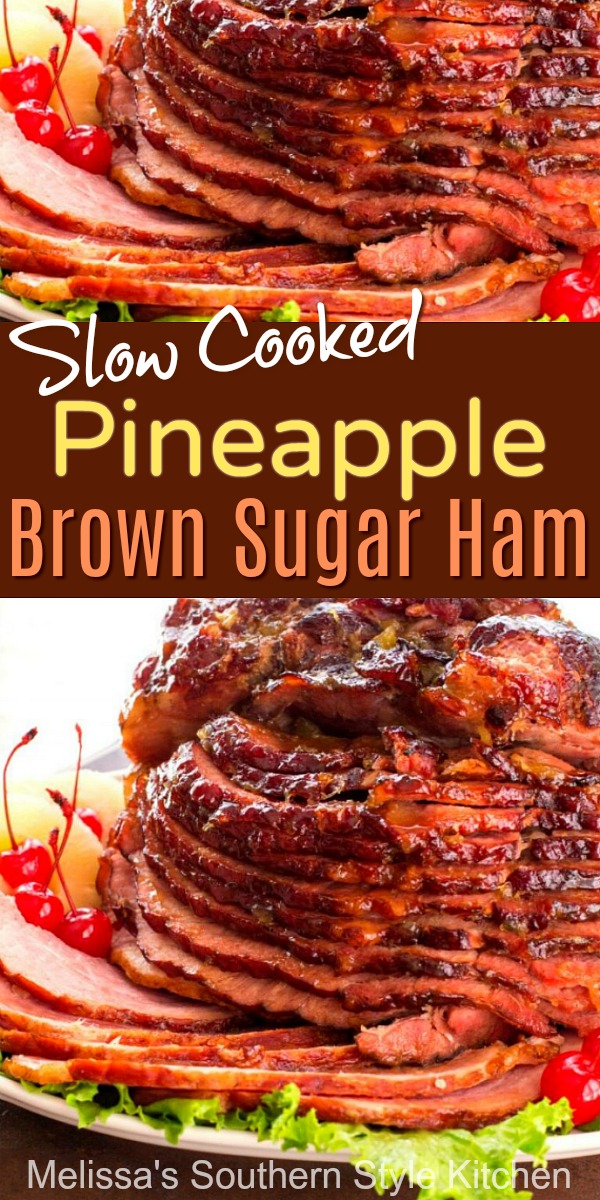 This glorious Slow Cooked Pineapple Brown Sugar Glazed Ham is a must-have on your holiday table. It begins with a spiral ham glazed with pineapple, brown sugar, mustard and a hint of spice to balance the sweetness. Pour apple cider over the ham, then brush it liberally with the sweet and sticky glaze and let the slow cooker do the rest. 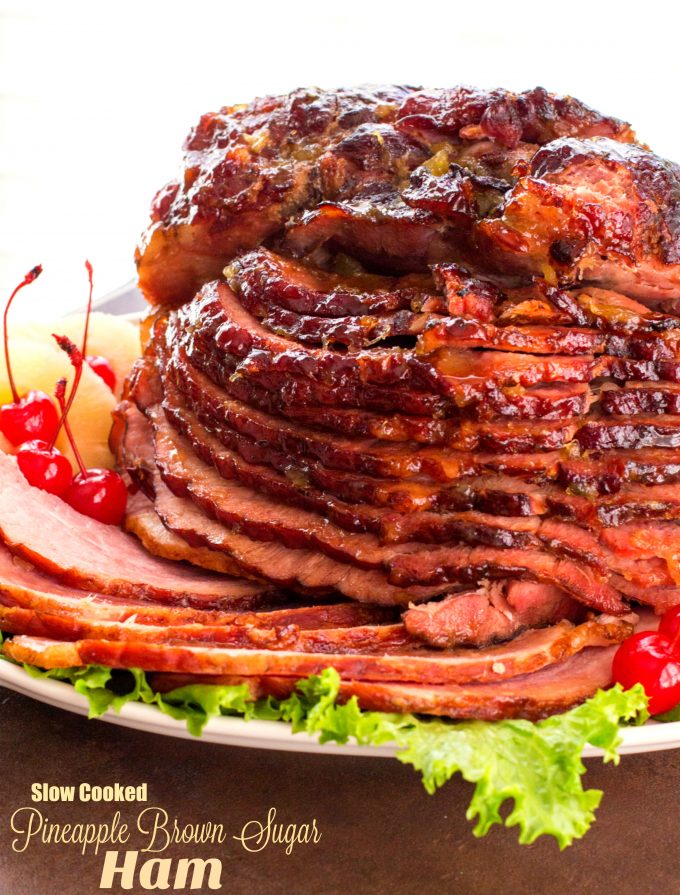 Making ham in a slow cooker, not only frees the oven space on a busy cooking day but, it also does a fabulous job of not drying out the ham.  Make plenty of homemade no knead yeast rolls for the ham roll snacking that's sure to happen later in the day.When I was  a girl, I always thought of baked ham as a "special" meal. Both of my Grandpa's had a good bit of land and while one focused his efforts more on gardening, the other raised livestock as well.  On his farm was an old fashioned smokehouse where he smoked his very own Virginia hams from livestock he himself had raised. I actually thought this was normal, and only as an adult realized the treasure that was hanging in that smokehouse and how fortunate we were to regularly enjoy such deliciousness. 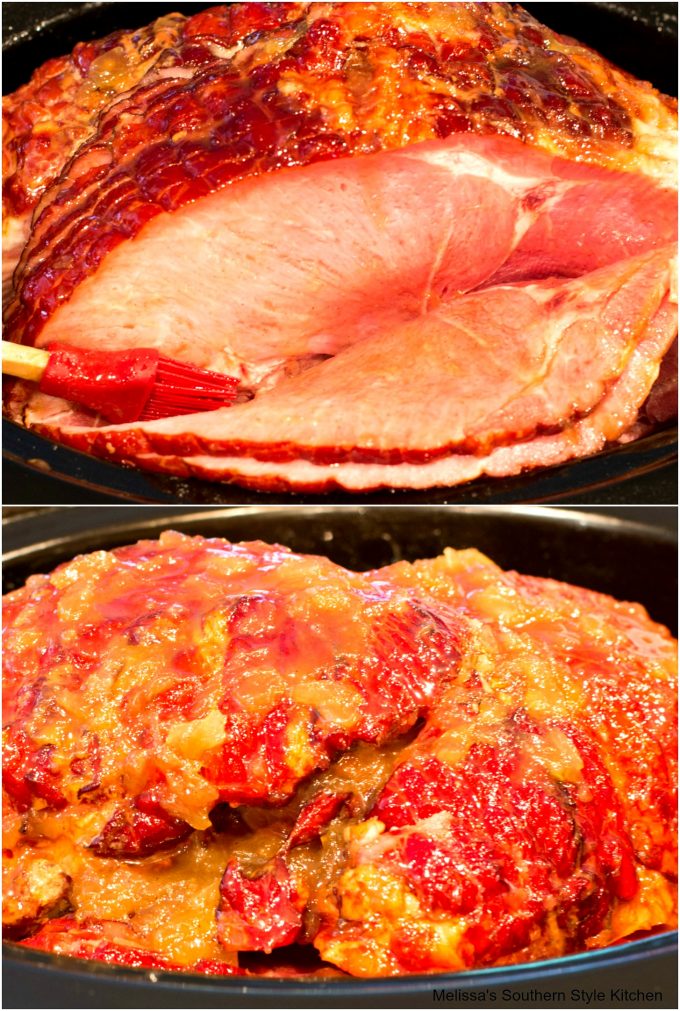 These days with life as busy as can be, it's nice to have an alternative to an oven baked ham method when making a special occasion ham. This ham turns out beautifully and has become my favorite way to make a spiral ham that's already fully cooked but, needs glazing and gentle warming. Serve this beauty for a special occasion or any time you need a gorgeous centerpiece for your meal. 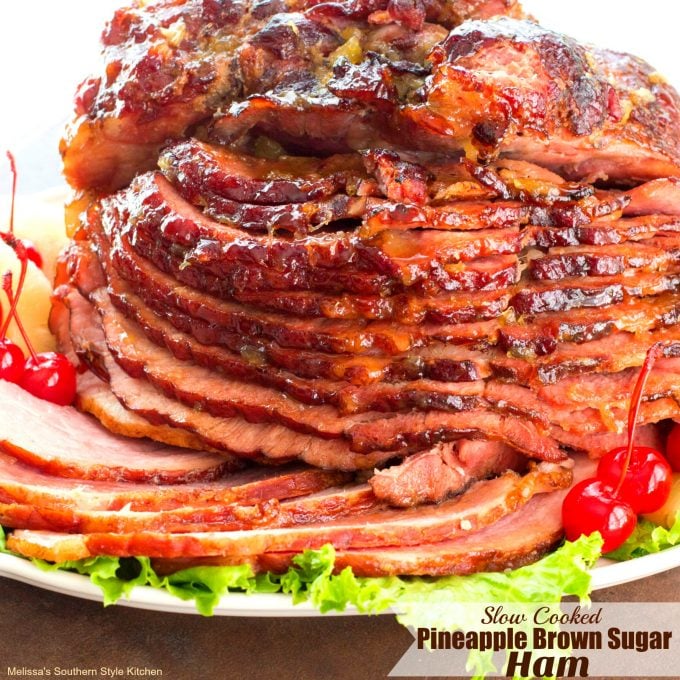 Transform it into Southern Ham Salad for sandwiches or cozy up to a bowl of Crock Pot Ham and Bean Soup. My Iron Skillet Ham and Cheddar Cornbread is delicious with a bowl of beans and these single serving  Broccoli Ham and Cheese Muffin Cups or Ham and Cheese Waffles are simple but, delicious. 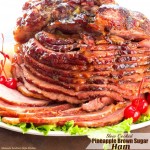 At the end of slow cooking you can char further by placing onto a baking sheet and broiling in the oven to char the glaze, if desired.
Tried this recipe?Mention @melissassk or tag #melissassk!
Pin
Share
Tweet
Share
Email
13KShares
« Meyer Lemon Poppy Seed Yogurt Bread
Pull Apart Pepperoni Bread Sticks »